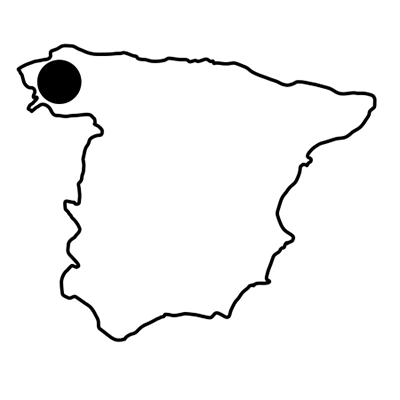 There’s a rising tide of the territorial wines of Rías Baixas. Superior ones. More ambitious. Inviting to a whole lot more of everything. And Bodegas Fulcro is surely signing under on this progressive wave of bliss and happy drinking of Galician wine culture.

In the top of one of the oldest areas of Rias Baixas with vine, right in front of the Atlantic Ocean, is where Bodegas Fulcro is to be found. Everything started off as a passionate hobby project of father and son, making wines for own consumption for the family. Fast forward a few years and the son Manuel Moldes, or ‘Chico’ as everyone is calling him, had left his job at the bank to focus full-time on wine. In 2009 he took his drive on making wines to the next chapter, decided to bring their garage project (literally) and establish the wines of the bodega to a broader audience. Today he is a full- fledged
grower and wine maker. Many years and trials, and a little
guidance of good friend Rodri Mendez, has put Bodegas Fulcro
as one of the names to forever bear in mind.

Bodegas Fulcro is a true garage winery, both in scale and spirit. Chico is remaining faithful to family traditions but with personal style of total
respect for the environment. The winery is situated in Pontevedra
and the vineyards border the coast in vicinity of Sanxeno and Meaño in the sub-region of Val do Salnés.

The climate in Salnés is mild throughout the seasons but can be extremely saturated. To avoid mildew all of the vines are pergola planted. Nature is left to do its magic in the vineyards and the parcels are worked by hand. The fundament is minimum intervention and maximum expression of the land. The vineyards are on granite and schist bedrock with topsoil of the decomposed bedrock, varying in grain size from talc-like sands to loamy mixtures of clay and sand.

Manuel’s approach to his Albariño range (also making red wines not yet in Sweden) is to maintain notably singular characteristics, all influenced by the bedrock and topsoil rather than the work in the cellar. The vines range from 25 to 70 years of age. Fermentation takes place spontaneously, not going through malo and the wines are aged in both inox and used French oak barrels, varying in size from 500 to 700 liters. As opposed to the more regional norm of half a year in barrel, Moldes approaches a lengthy time between nine to eleven months before bottling. This way some of the primary fruit qualities are peeled away, making room for more of the individual nuances to more firmly reveal themselves. Grown within the eyeshot of the Atlantic the wines are not leaning on being some simple seaside gulp. Being granite-built its wines of confidence and sizzling minerality, the nerve of costal Albariño always being present but with a far more prime depth and energy.

Now. Don’t waste more time with your tangled curiosity of the Fulcro wines, just place Rías Baixas as one of the most supreme white wine-producing regions in the world and dive deep into the outstanding bottles of this producers.